Camouflage, an abstraction of nature and a powerful symbol, has a rich history that has involved artists since its inception. Though first developed and used for practical purposes by the military, camouflage was eventually appropriated by fashion designers, commercial designers, and artists for symbolic and aesthetic ends. Since its first commercial use after WWI, camouflage has undergone several transformations and shifts in meaning. It began to be used in the fashion world, and it can now be found on many commercially produced products outside of the military and hunting spheres. My long-term interest in natural form and abstraction led me to use camouflage in the DPM (Disruptive Pattern Material) and Dazzle Painting Series. The title of the latter series references the “dazzle paintings” on ships in WWI and WWII that were painted with bold abstractions to obscure the outlines of the vessels and confuse the enemy. The organizational structure for these paintings is based upon sacred geometry, specifically variations of the quincunx or double cross form, which originated in early depictions of the cosmos. The Italian Cosmati school of marble workers, known for their geometrical mosaic work in the thirteenth century, used this form extensively to embellish pavements in Christian churches of the thirteenth century, and the form also has deep architectural roots in the centralized plans of Byzantine churches. Melding military camouflage patterns with sacred geometry offers unlimited possibilities for combining rich and contrasting visual forms. With military power and religious ideology currently at the crux of many global conflicts, this combination is especially timely. The contrast of the sacred with the profane is apparent but not paramount. Although this series incorporates military and religious cultural symbols, it is not a commentary on either, but an exercise in blending opposites to make something new. Each painting challenges me to contrast and layer the camouflage patterns within the framework and variations of the quincunx. The fluid, transparent watercolor medium has been chosen to soften the slick camouflage graphics and strict geometry, while the subtle layering of veiled color connects and dissolves shapes. The world of these paintings is in flux in lateral shifts. The paintings resemble mandalas both in form and complexity with the result being a transformation of two disparate symbolic forms. 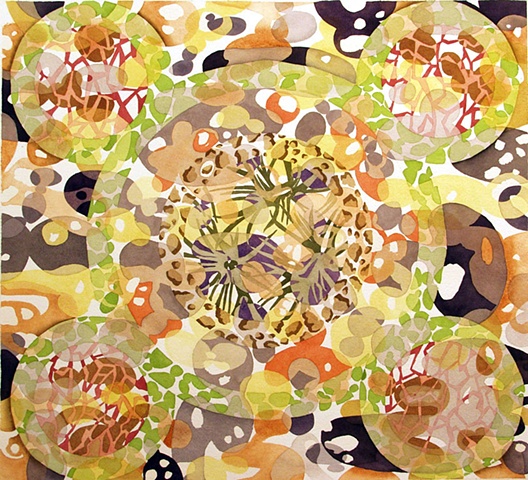